We both feel a bit like our time in the Adrar region has just been a taster for future trips we will make here. The Adrar is a high plateau above the desert, up to 1000m. It’s rocky and sandy but supports a lot more life than the desert normally would. We’ve seen lizards and birds and even a hare, though we haven’t seen the elusive antelope that are supposed to be here too.

On Friday we traveled out to Chinguetti up on the plateau. After a relaxed start we got underway, refueling the bikes and re-inflating the tyres after their ordeal in the desert crossing. We used about as much fuel as calculated so it was a relief to have gotten things right despite some worries at the time in the dunes when you know you are using a ton of fuel to keep the bike moving through the soft sand.

We took the Amugjar pass up to the plateau, amazingly this used to be the main road to Chinguetti until they opened up the much faster and direct Ebnou pass.
It took us a couple of hours to do the pass, much faster than the supposed three hours in the Sahara Overland guide book, but I guess we were on lightly loaded bikes and we were blitzing it because it was just such a fun piste!

We still stopped quite a bit to just admire the breathtaking vistas and to take pictures (which fail to do the scenery justice) and take on water (we didn’t take enough for such a short ride) in the 35 degree heat.

It was sheer pleasure to be out in the wild with the bikes running well and a fantastic piste to open up on. There were times we nearly over did it and had to reel ourselves in a bit, but we had fun and really enjoyed ourselves. 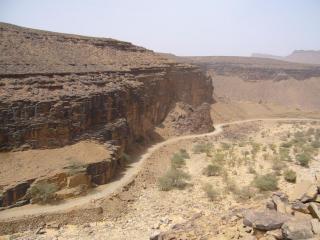 The only casualty was the end of Keith’s clutch lever which broke when he over did it trying to drift the bike around a sandy mountain hairpin. Not too serious and easily filed down to a nice smooth end that won’t break again! We had contemplated cutting them off anyway so it was a bonus!

On the way up the pass we saw the shell of Fort Saganne, which was actually made for the film of the same name. It’s not huge or impressive, but it’s location is. Sitting astride a commanding view on the edge of the plateau.

Once we made it to the top of the pass it was an easy burn on an arrow straight but corrugated dirt road to Chinguetty where we spend the afternoon being assaulted by the “Donnez moi un cadeau” brigade yet again.

We walked around the ruins of the old town, most of the buildings were shells and had been turned into rubbish pits and toilets. The only old buildings still standing are the famous libraries and the old mosque. We gave the ancient libraries a miss as the guy there wanted way too much for us to see some of the ancient scrolls – and as it felt a little underwhelming we gave it a miss. 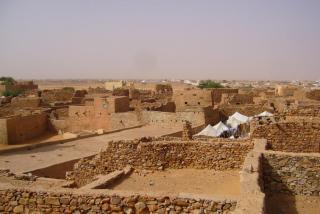 Chinguetty is special in one other way, it’s where we saw our first truly beautiful Mauritanian girls. Here the women are wrapped from head to foot in brightly coloured clothes with only their face or eyes showing. One of the girls was selling trinkets she carried on a bowl on her head and she was so captivating she held Keith in a long conversation in French that definitely exceeded the where are you from and would you like to buy this trinket, though she was cunning enough to still try and sell him a keyring for the bike halfway through! When Keith showed her his current keyring she laughed and said hers was far better and I think we both agreed, though we still didn’t part with any money. These two girls were black Mauritanians – formerly slaves of the Moors (Arabs), they have since taken on Moorish culture and language.

You know you are being given the eye here when a girl walks by with her friend and as they pass she and her friend cover there faces with their robes and look you directly in the eyes with a smile on their covered faces!

After a bit of refreshment and a stroll around the town we left Chinguetty heading back to Atar via the new Ebnou pass. It took us only an hour to get back, so fast is the new road! There was even tarmac on road, but only for the mountain pass itself. Though the tarmac hadn’t seemed to stop some car’s and trucks going over the steep edges! Quite a sobering site to see a ball of metal at the bottom of the canyon that used to be a car or the bed of a truck!