One week, one super friendly guest house, one uber-unfriendly guesthouse, one bad mistake, two repaired bikes, more fan-action than you can shake a stick at and the best fast food in all of west Africa. I suppose that’s the short and fast version of our time in Togo.

We were sad to leave Togo but we didn’t leave empty handed. The bikes are now in tip-top condition. Dider, the resident KTM mechanic, fixed our chariots up nicely. We both have new tyres, new chains, clean engines and a lot more confidence in our machines. Lots of thanks to Dider and Michel at Toni-Togo for their expertise, advice and help. 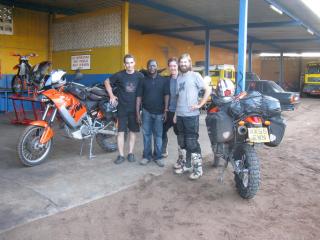 While in Togo we muddled around a bit with Accommodation. The first guest house we stayed in, hotel Le Galion, was owned and run by a Swiss family. The day to day running is dealt with by Yawu the youngest of the clan. Yawu is an earnest and impressionable character who’ll take you out on the town after the hotel bar closes its doors. Unfortunately we hadn’t found this out before making our only mistake. We moved!

We stayed at Le Galion on the first night as Rich and Sash had been there on the two previous nights and we thought there might be a chance they’d still be there. Sadly they’d moved on. However we did manage to catch up with them later on in Benin. The next day we made a terrible decision, me being 99% responsible for this one, and moved on to a bad overlanders site outside LomÃ©. Normally these places are teeming with fellow travelers. This place was a great exception. I pity all overlanders who see LomÃ© through the doors of Chez Alice. It’s a vacant, run-down, expensive and uber-unfriendly place

Gutted that we’d made a terrible blunder we reconciled and retreated to Le Galion with our tails between our legs begging Yawu to take us back. Being the gent he is he even gave us a 30% discount. Awesome!

So it was with sadness that we departed. Yawu tried his best to keep us though. However his cunning plan was foiled and by nightfall we arrived in Cotonou, Benin. Sash, Rich and Kru had all but given up on us and were about to turn in just as we rolled in at 11 bells.