So comes the long awaited answer to the mystery of what really happened to Jeremy’s bike. I’m sure many of you out there have suffered hours of lost sleep pondering the infinite possibilities. Yeah right! 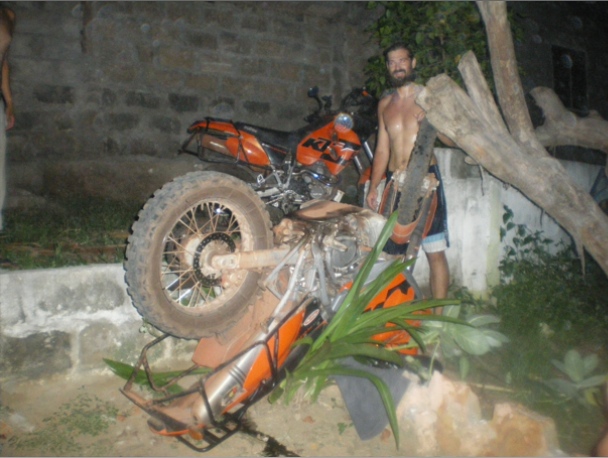 After a good day spent in Accra we returned to Amamomo camping and parked both bikes on the ledge just to the left of Jeremy’s bike in the picture. From here even we’re not sure precisely what happened. Unfortunately there were no witnesses present. So nobody knows for sure. What is sure is that the bike fell to its right and amazingly managed to remain upright albeit in the wrong direction. Our theory is that the soft ground gave way and the bike fell to its right.

Sadly not so spectacular after all but you have to admit it made for quite an interesting and unique picture. I’m sure most bikers would balk at ever having to see their bike from this angle. Thankfully the only real victim of this incident was Jeremy’s GPS mount. The bike didn’t even have any scratches. A testament to the rock solid robustness of the bike itself. Now we have no GPS mounts. Mine was a victim of the infamous Ronda road. Let’s hope that the next 8000 kilometers down to Cape Town can be had with the rubber side down.