After we decided to stay on in Nigeria for a couple of months we had to make our way back from the Drill Ranch at Afi Mountain to Calabar in order to extend our 21 day tourist visas by another couple months so that we could stay on legally in Nigeria. The journey is a 300km trip that takes a minimum of 4 hours.

The first 15 km out of the Drill Ranch is a rough single track dirt road with some fairly deep and muddy sections that Keith had managed to explore fully on the way up! Our first real experience of wet and muddy roads with what we thought at the time were pretty deep ruts (about 2 feet deep tracks down the road).

After this initial off road section its lovely tarmac all the way to Calabar, or so we thought! On the way up it had only taken us 3.5 hours to cover this section, however we were in for a surprise on our way down!

When we arrived in the first big town along the way, Ikom, we were told that the road was impassable to Calabar, but we ignored them because you have to take everything with a pinch of salt here in Africa. So we steamed on down towards Calabar crossing a few muddy patches of road where the rains had come through and covered the road in dirt – nothing serious… until we came upon a queue of cars parked on both sides of the road 100 meters long!

We rode up as far as we could go and wedged ourselves in between parked cars to try and check out the problem. Immediately we had a crowd around us and everyone was clamoring around us saying things like “White man, can you fly?” along with the usual questions about the bikes and our journey.

Keith went up ahead to check out the problem and came back shaking his head saying there was no way across – rain from a day ago had washed away a concrete bridge over a river and there was no way for vehicles to cross. Our side was a sheer 3 meter drop into the water with a gap of 10 meters to the road on the other side, with the collapsed bridge in between.

People were crossing over with some makeshift bamboo walkways that had been made by some opportunists who were charging for the crossing, this is Nigeria and people are enterprising when it comes to money!

The only vehicles that were able to cross over were some small 125cc motorbikes that were manhandled up and down the steep and slithery muddy river bank and across the river by pirogue (canoe). As soon as the pirogue guys saw our white skins and bikes they were clamoring for our business. There was no way we were going to trust our bikes into their hands though, they had nothing to lose, whereas we could have lost the bikes in the crossing, it was just too steep and we didn’t trust them to not break something when they manhandled the bikes across in the rickety narrow canoes. Not to mention that we simply couldn’t afford the crazy prices they were quoting to take the two of us across.

The problem with this road is that it’s the main road through the Cross River State and the only other way to Calabar involved a 12-14 hour detour.

Thinking that there must be some other way that we could get around the river on our bikes we decided to retreat back from all the touts at the river who were just vying for our business and try and find some real information at the closest town.

At the closest village the people started by saying that there was no way around, but eventually a guy turned up who said that it was possible to go around… but it was far and difficult, then another guy turned up who said it was easy and not so far! By this time we were surrounded by quite a crowd and the prices these guys wanted to guide us was crazy. They wanted us to pay for two of them on their cheap 125cc Chinese bikes to guide us.

It was at this point that we met our angel, in the form of the Revered Doctor Eugene, an optometrist and missionary who had seen us talking to the folks and had turned back to see if he could help us at all. And of course he was very helpful, we managed to arrange for just one guide as a pillion and then the good Reverend Doctor went out of his way even more and said he would come along to make sure we were ok (he could have just walked across the planks at the bridge and been on his way!)

So hoping for the detour to be somewhere in between far and not far, and easy and difficult we set off with the guide on Keith’s bike and the good Reverend Doctor in his three piece suit with me (Jeremy).

Things started out easy enough to the first village before they started to get interesting. We followed a foot path through the fields and forest, wide enough for our bikes and no more. After about 5 km of pretty easy tracks we were really enjoying ourselves and starting to think that it was easy enough and we would be around the broken bridge and river in no time at all… until we came to the crossing point for the river!

At this point the river was not as deep, but much wider, about 100 meters, with a couple fords and a small bridge for the deepest part. Still this meant crossing two 20 meter stretches of water that we found out were up to a meter deep!

Now the thing to understand about our bikes, the KTM 640 Adventure, is that the air snorkel is under the seat and as long as this is above water then the bike can ride through water fine, however this is only 80 cm from the ground, and lower still when loaded up with rider, luggage and a pillion rider!

Approaching the first stretch of water was pretty intimidating, Keith went first and made it through fine, with his guide sitting fairly relaxed with his feet on his foot pegs. I was up second, with the Reverend Doctor sitting behind me, this was where I think he realised he might have bitten off more than he had expected! We were definitely approaching the difficult end of the spectrum! So he took off his shoes and socks and rolled up his suit trousers, lifted his feet off the pegs and put them around my waist!

I’m sure we were a strange sight for Keith watching from the other side as we approached the water. Still the bike is strong and once you are moving in the water you just have to keep the power up and momentum and movement going till you break free on the opposite bank.

The second stretch was even more intimidating and longer looking, but you just line the bike up for the best part and then approach it with enough speed to keep it going all the way through. It gave us a fright though as one part of the water came right up and over the seat of the bike and there is an awful moment where you wonder whether you should hit the kill switch to stop the bike getting flooded or just power through with more gas and hope your bow wave is enough to push the water away from the snorkel. Both of us elected for the extra power approach and were up and out the other side of the bank in no time. The bike never skipped a beat and there is quite a feeling of elation when you look at what you’ve just been through! (In retrospect we should have really walked it first!)

Looking back at the detour we made around the bridge, this first part was actually the easiest as we then proceeded to cover another 15 km of muddy footpaths, up and down hills with a couple feet of mud at times. Much harder than the earlier river crossings. There were a couple of steep hill sections where we had to get our pillions to walk and push as it was so tough. All the while it is 30 degrees C outside and we are sweating in our full motorcycle gear with no drinking water, we just hadn’t been prepared for this eventuality.

It’s no wonder then that as we reached the outskirts of the last village before the main road, Keith had to pull over and sit down for a minute from sheer exhaustion and actually blacked out for a minute before coming to as the rest of us arrived. 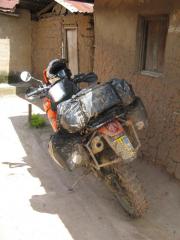 He was thankfully able to gather himself together for the last small ride into the village where we could get some drinking water and rest properly. We must have looked quite a sight to the villagers as we rode in, as if from nowhere, with our strange muddy bikes and gear and with our passengers looking slightly muddier and soggier than when we had departed! We were soon surrounded by a crowd of curious kids with their mothers watching from the doorways as we stopped and re-hydrated ourselves. Most of the kids had never even seen a white man up close before and they were pretty shy, but soon curiosity got the better of them and they were all surrounding us.

Once we got rolling again the going was easy to the main road which we rejoined and dropped off our guide. The Reverend Doctor Eugene was amazing and even paid for part of the guide’s fee and our refreshments as we were running low on local cash. He was definitely our angel for the day and his spirits never dipped at all, even when crossing the deepest water or muddiest patches – he just prayed “Jesus, Jesus, Jesus” aloud, which I’m convinced worked for us!

It’s funny to think that a normal stretch of highway that you take for granted can lead to such a major excursion into the bush when it breaks, but both of us agree that it was definitely the highlight of the day and a major test of ourselves and the machines and thankfully we all came through with flying colours. It’s why we are loving this journey so much, imagine our day if we had elected to sit at our desks in the UK? A 4 hour journey becomes 6 hours? No problem, this is just another day in Africa!

One apology, we don’t have any pictures of the bridge or the trip from the time till we got to the village on the other side of the detour. I guess you could say we were caught up in the activity of the moment, but also we were in a rush because we had animal blood samples that had to be kept chilled or they would go bad and a lot of work lost so we just kept pushing on. A picture is worth a thousand words, but hopefully we have been able to convey something of the day.