Calabar on the border with Cameroon is the stop off point that most overlanders make for two reasons, because it is the best place to get your Cameroonian visa and because it is such a wonderfully chilled out small town with a great atmosphere and vibe about it with no security worries at all.

Our arrival saw us come down to earth with a bang as we went around town trying to find the cheapest decent hotel room we could find for the 3 days we were planning to stay in Calabar. In the end we found a cheap room but even by Nigerian standards it was extremely basic, with no electricity during the day and no running water – just a bucket in the bathroom. Accommodation, like most things in Nigeria (except petrol), is very expensive compared to the Francophone countries of West Africa.

We managed to get our Cameroonian visa in less than a day which was a pleasant surprise, in fact we dropped our passports off at 8 in the morning, payed our money, completed the usual forms and (surprisingly) a letter explaining why we would like to come as tourists to Cameroon! By 1:30 in the afternoon the visas were issued and we were good to go. 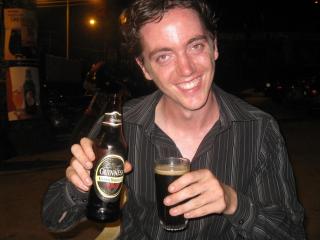 So visas in hand we only had one more thing to do, which was to visit the Drill Ranch in Calabar. It had been highly recommended by both our friends in Lagos and also in the guide books, so we made our way down to the guys at the ranch to see the Drill Monkeys that they have been rescuing back from the brink of extinction as well as the many other animals that they have rescued from captivity. 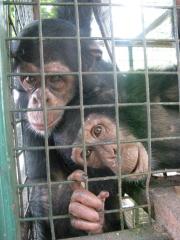 Liza and Peter came to Nigeria 20 years ago as overlanders with a 10 day transit visa to buy cheap petrol and have been here ever since working to rescue the Drill Monkeys from the edge of extinction. Its incredible to see what they have managed to do do in this time, working with the local community and developing the most successful Drill breeding program in the world!

When we arrived at the ranch Peter was there to greet us and show us around and explain the work that they were doing and to entertain us with stories of his time in Africa. I think we all took an immediate liking to each other and before long we had offered to stay for a few days and use our IT skills to develop the Pandrillus Foundation’s website, which didn’t exist up until this point!

So the next day saw us moving out of our flea bag hotel in Calabar and into Liza and Peter’s spare room, which was a sheer luxury compared to our previous digs with fantastic home cooked food every night.
There are a few fantastic things about the work Pandrillus does, but one of the things that really won us over was that they were using all Apple Macs! For the two of us this was a major draw as we are now over 4 months in on the trip and we are missing our MacBook Pros and ruing the day we decided not to bring them with us! So when we were lent two of their Macbooks to do our website work we were two pigs in swill!

A week later and we had managed to craft together a pretty good website for Pandrillus, you can visit it at www.pandrillus.org. Thanks to Liza and Peter for keeping us in cold beers and great food and all the fun we had staying with them in Calabar. Overnight they became like surrogate parents for both of us and it has been fantastic to run across them here in Nigeria. 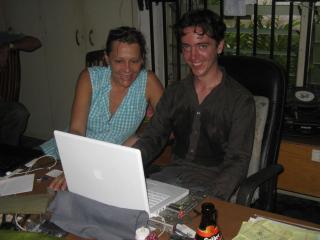 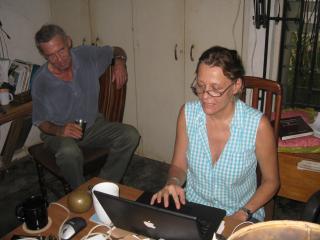 The Nigeria gallery page has lots more pictures of our time in Nigeria so far.