It was a huge relief as the plane’s wheels left the ground and our plane circled Lagos one final time before heading towards London, the last few hours of check in had been pure Nigeria. Three hours in a queue at check in, surrounded by chaos and fist fights (no kidding!) as people jockeyed for position to check in, with only one woman checking in all the passengers for a flight! Thankfully I was one of the first in the queue having arrived four and a half hours before the take off time, I still had to fight for my position though I guess I was given a bit of leeway for being an oyibo (white man or foreigner).

I had my last few laughs with the other Nigerians on the flight as we had to show our ticket stubs three times at the gate as they messed up the gate check, before we boarded the plane. Nigeria wasn’t quite done with me though, as a wee kid boarding the plane shouted out “OYIBO” and the passengers around me all laughed – I guess it was kinda novel for the kid seeing a white man (I was the only one) but he will get quite a shock when he lands in London!

It felt really strange to fly over all the countries, places and people that we had spent the last 7 months driving through in just a few hours. It just goes to show how much you miss out if you fly!

So began my return to Europe, one month back in civilisation to catch up with family and friends, attend a wedding and a stag do and generally eat my way back up in weight! Keith had already spent the month of July in the UK sorting out his flat in London and seeing family and friends in Dublin and now it was my turn in August.

It was quite a shock to the system to arrive back in the land of civilisation, where things just work – electricity, roads, bridges, phones, blazing fast Internet, customer service, almost no corruption, people don’t shout at me in the street and it all feels familiar again!

Then again there are things that you miss about Africa, striking up a conversation with nearly anybody wherever you are and having a laugh – in Europe people would rather avoid eye contact let alone talking to you! No more crowds of kids surrounding you, the easy going nature of the African is lost in our hustle and bustle, even when someone is trying to cheat you they are pretty fun and good natured!

For me, Jeremy, it’s been a good time to get out of Africa and relax, see family and friends and think about life and the trip a bit before returning. It’s mainly involved gorging on everything in sight, in the first week I put on all the weight I lost during the last 7 months, relaxing with family in Finland and catching up with friends and family in London, Paris, Manchester, Leeds, Sheffield and attending a blazing stag do in Berlin! 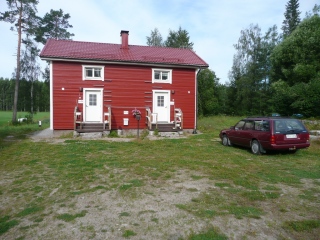 Quite a big change from our Africa pictures! More pics in our new European Holiday gallery page.

I was due to return to Nigeria on Tuesday the 2nd of September… however I’m still in the UK, watch this space for more info!