One of the guyâ€™s here has a car which had an accident which twisted the chassis of his car and the problem was causing all sorts of issues, from excessive tyre wear, to destroying the ball joints and even wearing out the steering box so we needed to go and get it sorted out.

Usually if you had a car that was as badly damaged as this at home the insurance company would have written off the car and given you the cash, as it would be too expensive to repairâ€¦ however not in Africa where anything is possible with the most rudimentary of tools.

Chassis out of alignmentâ€¦ no problem, just lift the engine and the body off the chassis, make a few cuts here and there, weld it all together in the correct position and you are done! It was three days work for the guy and he had about 10 of his guys working, including his own mechanic and electrical guy and it cost about 400 pounds sterling, including all labour and parts! 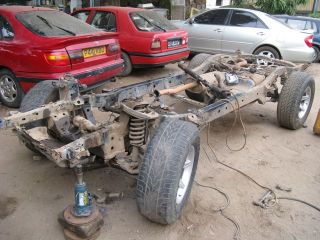 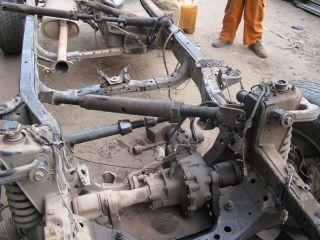 The steering box was completely gone, but the mechanic was able to take it apart, find a replacement for the broken part from another Toyota steering box and put it all back together as good as new! 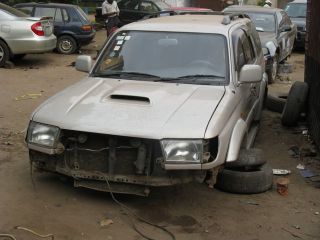 The guy at the body shop was quite amazing and specialises in taking accident damaged cars from the US and Europe and fixing them so well you canâ€™t even tell they have had an accident! Even looking under the bonnet of one of his Toyotaâ€™s that he had fixed you couldnâ€™t tell that the thing had been completely crumpled.

All of this achieved with a small area of dirt, a corrugated iron lean-to, a few basic tools and a lot of willing strong assistants. True innovation does come from Africa, just a different kind, how to do more with less, perhaps we can learn a little from Africa during our own economic downturn and be a little less wasteful?