You know the feeling – you just left the house to catch a train or a flight and you have that nagging feeling that you’ve forgotten something back at home! Well I’m about to embark on the biggest trip of my life and I feel completely nervous thinking about what Keith and I are about to embark on. It’s one thing to have a dream but it really is another thing to actually act on it! I feel like I’m now falling into a new more dangerous category, as you can see from one of my favourite quotes:

“All men dream: but not equally. Those who dream by night in the dusty recesses of their minds wake in the day to find that it was vanity: but the dreamers of the day are dangerous men, for they may act their dreams with open eyes, to make it possible. This I did.” – T. E. Lawrence

Well we have read the books, watched the dvds, bought the bikes, packed up our lives, sorted a million and one things, spent way too much money on kit, had the leaving party and now tomorrow Keith and I will be making our departure from this cold and wintry country and start heading south! I wish I could say that I feel we are ready, but I would just be kidding myself! I’ve only just completed the last few bits and pieces on my bike today and Keith’s didn’t even start this evening! (He had left his heated grips on and the battery was flat!) So there’s going to be a mad panic tomorrow morning as we sort out the last few things on our lists before we head off.

We have cut it fine, but I guess for there is only so much you can do for a trip like this and then you just have to go for it! I’m sure that as we go along we will find out a lot more about ourselves, each other, the bikes and the world, what an adventure! Still you guys who are reading this are all our great friends and I would love it if you did even one small thing to step out of yourself this coming week as an act of solidarity with us, act on a dream or start training for that marathon you always said you would do, be a dreamer of the day!

I’ve uploaded some pictures taken at our leaving party in London, however the camera came out a bit late so not everyone who came was captured. 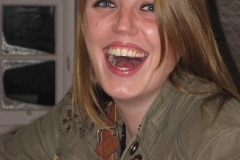 Our leaving cocktail party in London, the camera came out a bit late though so I'm sorry if you don't see yourself in the pics.

On the admin side of things I’ve updated the sponsorship pages with details of how to sponsor Dignity, one of the projects we are raising money for, however charity: water still haven’t been able to get registered with JustGiving so as soon as they have that I will start pushing the sponsorship side of things a whole lot more!

The KTM 640 Adventure has a 625 cc single cylinder engine, what this means in the real world is that it has huge amounts of low down torque and it vibrates everything to bits. No wonder these bikes area called big thumpers! The bike is really capable off road and on the dirt tracks that we will be facing in Africa, however the vibrations have a few disadvantages!

Last Saturday I went down to Bristol and back on the bike to see friends and get some stuff, on the way back I noticed that when the engine was at a certain amount of revs there was an almighty rattle and vibration in the whole bike coming from the bottom of the engine.

When I stopped to take a look I noticed that my rally bash plate was really loose and on closer inspection it seemed that the four screws that hold it in place under the engine had all come loose and fallen out! There were only two bolts on the front holding it on and the vibes had actually broken the bracket that these bolts were attached to!

The bracket that was broken.

Thankfully it held together the last few miles back, I just made sure I didn’t site anywhere near 3000 RPM!

For those of you that don’t know, the bash plate is there to protect the bike and engine from any bangs from underneath, mine is a rally bash plate which means it has two built in tool boxes on either side for handy access and to keep weight low down. I don’t think mine will be doing much protecting till I get it all fixed up though!

The pictures below show the bike with the bash plate on and then the engine without the bash plate as it is now while I wait for a new bracket from Germany!

This being my first blog post I feel I must highlight the fact. It’s actually my first blog post ever. Jeremy has been a bit more prolific in that regard he’s also been instrumental in making our online travel diary notions a reality. Very much appreciated Jez!

We’re going to keep this site updated with photos and stories from our trip as we make progress through it. For now we’re in preparation mode and gearing up for what will surely be the journey of a lifetime. The two of us took a trip to New York recently. We stayed with Chris, a friend of ours, in downtown Manhattan and had a really amazing weekend. Drinking Manhattans in Manhattan was pretty sweet if maybe not a little on the cheesy side but hey they’re a tasty number! It was my first time visiting New York. It’s everything everyone says it is and somehow more. For anyone who’s not been I’d highly recommend it.

While in New York we hooked up with Scott and the folks from Charity: Water. These people help communities in Africa build fresh water wells and teach them how to keep them up and running. They’re helping from a very basic level and doing fantastic work. Water is the source of life after all and without it or a quality supply of it a lot of people are dying unnecessarily. During this ensuing adventure we’re going to try and raise awareness for certain projects in Africa and hopefully do some good for ongoing aid work being carried out there. Together we know quite a few people and hopefully our online presence will get the message out to others.

I’ve had my KTM 640 Adventure for a couple months now and despite not having a huge amount of opportunities to shake it down properly I have been able to do a few trips on it.

In a terrible first trip up North soon after I got the bike the rekluse auto clutch I have fitted from the previous owner managed to break down just outside of Leeds on the M62 to Manchester! Not a happy ending and not the first time I’ve had to make my way back down to London on the train leaving my bike behind.

Thankfully my brother Josh was able to sort it out for me in Leeds and then ride it down to London for me and it’s been trouble free since then.

I’ve also done a trip to Paris and back via the Eurotunnel which was great fun, especially riding around Paris with my mate Rohan on the back. We shot a shaky but funny video of us tearing down the Champs Elysee!

The trip was trouble free and in fact the bike was great, the only thing that I really needed was some heated grips as it is now absolutely freezing and after 30 minutes riding your hands turn to ice blocks.

The picture below is of the bike on the Eurotunne somewhere between England and France.

This last weekend I also did a trip up north from London to Sheffield, Manchester and Leeds before heading back down to London on Sunday night.

I had a wicked time in all three places seeing family and friends, though again it was my hands that suffered the most! I really must get some heated grips for both bikes or it is going to be a very painful journey through Europe in January!

The picture below is of a friend Naomi trying the bike out for size. I don’t think many people can really get their feet down on the ground as it is such a big bike!

The only minor failure on the bike on this trip was that one of the bolts on the hard panniers vibrated out and was lost somewhere on a motorway in England! It is the bolt that attaches the rack to the footpeg hanger and the frame just above Naomi’s heel in the picture above.

Lesson learnt – always loctite everything and check the bolts on the KTM regularly as it is such a vibby bike that stuff just vibrates off over time!

Still the bike is going strong though there are just so many things to be done to it to get it finally ready for Africa and the big trip.

Watch this space for further updates as we are now entering the critical last few weeks before departure and the list of things to do doesn’t seem to be getting smaller!

I’ve updated some more pages on the site with a more detailed description of our current proposed route and also some information about us and added a sponsorship page.

Check them out and let us know what you think.